December 23, 2018
For the first time in the world, a unique event took place in Kyiv. The whole families of green Eco Santas and Eco Snow Maidens from different parts of the country came to the capital to show their will and a great desire to save coniferous forests from pre-New Year felling, revive them, increase and introduce new nature-saving New Year traditions.

According to statistics, 5 million conifers are cut down annually for the New Year holidays in Ukraine alone. A third of them are not sold and already on January, 1 becomes garbage at the Christmas markets of the country. Then they start to be joined by the “expired” trees thrown out of the apartments along with other garbage. The annual Eco Santa Parade is designed to change this unreasonable tradition, soulless to nature, forests, and its descendants.

In 2018 more than 100 people came to participate in the Parade in Kyiv. Each participant registered was presented with seedlings of blue spruce and cedar in pots by the organizers. With LIVE trees in their hands, Eco Santas and green Snow Maidens of Ukraine marched along the central street of the capital to the Mariyins’kyi Park in a carnival procession, where a holiday concert took place on the open stage with new nature-saving New Year’s songs, poems, proverbs, stories performed.

2019
In 2019, our Parade became International, as the Eco-Santas and green Snow Maidens of the neighboring country joined the good green New Year’s movement. The announced green New Year’s flashmob of Eco Santas was supported and carried out in the 15 settlements of Ukraine and Russia: Kyiv, Buzova, Gurivshchyna, Kolonshchyna, Ivano-Frankivs’k, Onopriyivka, Buda farm, Izmayil, Kryvyi Rih, Dolyna, Kalush, Cheboksary, Novocheboksarsk, Krasnoarmeyskoe village (Chuvashia), Mozhaevka farm in Rostov region. According to the collected data, more than 1,100 people took part in these events, most of them were children! Cheers three times!
In addition, Kyiv Eco Santa launched a petition to the capital’s authorities to ban the installation of felled coniferous trees on the squares of Kyiv for the New Year holidays. Dear conscientious citizens of Kyiv, show your will here – Sign the petition.

For the Parade, the second updated edition of the Eco Santa New Year’s Book was published following the results of the three-year International Creative Competition of Eco Santa. 397 people applied their energy for it to see the light!Оther 64 eco-active citizens of the country told us about nature-saving New Year traditions, which are supported in their families through a Google questionnaire.

In total, about 1,700 people actively showed their will and desire to revive the rich forests of the planet along with the New Year holidays, to celebrate the New Year ecologically, enhancing living beauty, taking care of the purity of the Mother-Earth and improving the overall living environment.

And on December 22, the celebratory Parade took place in Kyiv. The whole families of green Santa Clauses and Eco-Snow Maidens from Kiyv, Tchernivtsi, Malyn, Mykolayiv, Izmayil, Dolyna (Ivano-Frankivs’k region), Zhytomyr, Tchernihiv, Brovary, Luts’k, Kalush, from Ivano-Frankivs’k, Tcherkassy, Tchernihiv and Kyiv regions, Moscow and Antalya came to participate! Nine settlements of patrimonies and individual patrimonies of Ukraine in which families lovingly grow thousands of trees each on their own hectare of land throughout the country, were represented by the participants of the green Parade!

70 growing Christmas trees in pots were presented to the participants of the Parade and presented by Eco Santas to happy passers-by. A whole New Year’s forest will grow out of them and every year it will remind its happy owners of a good holiday and a significant event that took place on December 22, 2019 in Kyiv.

Thanks to all these active actions, the Eco Santa  Parade 2019got into the Ukrainian Book of Records, which we congratulate all of us and Ukraine as a whole with! Let our country begin a worldwide wave of environmentally friendly celebration of the New Year, where now, instead of felled trees, live GROWING conifers will become the main attribute of the holiday. May from now on, in honor of each coming year, new trees be planted around the world! May common rich forests – the “lungs” of the planet be restored! May peace and love reign throughout the Earth!

We congratulate everyone on the beginning of the New calendar year with this good green news! To be continued.

It was an interesting year that brought new ideas and formats. In the conditions of the incessant quarantine with the restrictions on mass events and the media’s diversion of people’s attention from the most important tasks of improving the shared living environment, the idea to create and shoot a high-quality professional video for New Year occurred. We are speaking about a New Year’s social, ecological, kind, sincere film, suited for family viewing, with a professional actor starring.  It would include songs, poems, drawings, good images from the Book of Eco Santa. The film which could brightly, efficiently and professionally get across the themes of ecology, a healthy lifestyle, family values, love and care for all the living around and nature-saving New Year traditions. The result is a whole short film! The most amazing history of its creation can be found on the website of the NGO “Cedars of Ukraine”.

For two weeks since the release of the “Evergreen Story” in Ukraine, over 33,000 compatriots have watched it. The film has also been translated into Russian, English, Chinese and is quickly spread by like-minded friends around the world. Glad to present it to your attention!

Eco Santa New Year's Book
The Eco Santa New Year’s Book is the most unique publication. It is the result of the three-year International Eco Santa Creative Competition, which children and adults from different parts of Ukraine and Russia participated in by sending their nature-saving New Year images.47 young illustrators, 32 authors of inspiring New Year’s poems, fairy tales, stories, riddles and proverbs of the new “green” time!

The time when people all year round take care of the restoration of the Earth, the safety and growth of their forests, and the New Year is celebrated by planting new coniferous trees and giving the seedlings of cedars, pines, spruces, fir, juniper in pots as gifts to their friends and acquaintances.24 families of “green” philanthropists from Ukraine and Russia, 270 participants in eco-lessons and master-classes on planting pine nuts supported two editions of this significant book with their contributions! The books freshly published with light, life-affirming images are already “flying away” to their co-authors and patrons. In the electronic version, you can familiarize yourself with individual works of the contestants on the pages of the NGO “Cedars of Ukraine” site.

New nature-saving New Year songs from the Competition and the Book have been posted on the Eco Santa YouTube channel. Read, listen, get inspired, share with your friends, distribute!
Those who are looking for a valuable gift can purchase the Eco Santa Book for their relatives and friends (160 UAH / 420 rubles / 7 $). We send all over the country – write to ukrcedars@gmail.com

P.S. The images sent to the Competition and included in the Book are captured in the social ecological New Year film “Evergreen Story”. 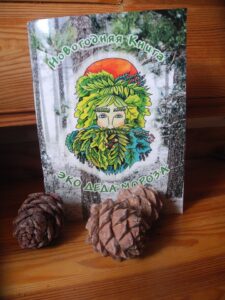 Our Friends and Support